Andros Island, some 2300 square miles in size, is perhaps the largest tract of unexplored land in the Western hemisphere. A coral limestone formation, Andros is dominated by thick impenetrable bush, sliced in pieces by inland waterways, and edged by mangrove swamp. To the north are hardwood and pine forests--including Andros Pine, Mahogany (Madeira), Horseflesh, and Lignum Vitae; along the east coast are the fishing and diving grounds of the Andros Barrier Reef. On the West Coast are the pristine fishing flats of the Great Bahama Bank. 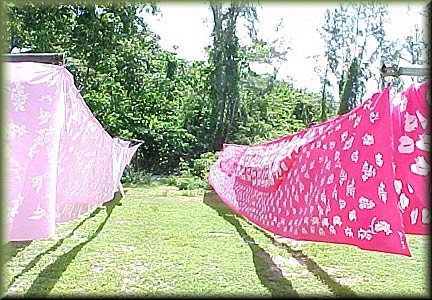 The Andros Barrier Reef, the third largest in the world and the second largest in the western hemisphere, stretches 140 miles along the east coast of the island and rims the Tongue of the Ocean, with its 6,000-foot drop-off. Additionally Andros abounds in Blue Holes (underwater cave systems)--which have been the scene of some of the deepest underwater cave explorations in the world.

The population of Andros is 7,686 residents.

There are more than 40 known species of wild orchids on Andros, as well as endemic and migrating bird and butterfly populations. Other wildlife includes iguanas, wild boars and land crabs. Andros has a population of approximately 10,000 people, most of them residing in small towns located on the eastern coast. The island itself is the great provider, with the main occupations being fishing and farming. In addition, the island has long traditions in boat building, straw work, and wood carving.

Small communities established themselves up and down the east coast of the island, with the population peaking at about 10,000 where it remains today. With a formidable barrier reef on one side, and the shallow water flats of the Great Bahama Bank on the other--Andros remained overlooked (and perhaps saved) for many years from any potential development.

Small Hope Bay Lodge opened in Central Andros in 1960 as the first dive-dedicated resort in the Bahamas. The Lodge quickly became the backdrop for many of diving's most colorful and historical moments:

There are over 200 species of birds that inhabit the Bahamas--and Andros, with its vast undeveloped land, is home to many of them. Among the most common ! are: The Bahama Woodstar, the West Indian Woodpecker, the Loggerhead kingbird, LaSagre's Flycatcher, the Great Antillean Pewee, the Bahama Swallow, the Bahama Mockingbird, The Red-legged Thrush, the Thick-billed Vireo, the Black-whiskered Vireo, the Olive-capped Warbler, Kirtland Warbler, the Bahama Yellowthroat, the Black-cowled Oriole, the Great Antillean Bullfinch, the Black-faced Grassquit, the Melodious Grassquit, the Least Grebe, Olivaceous Cormorant, the Flamingo, the Bahama Pintail, Osprey, Kestel, Sooty Tern, Roseate Tern, Noddy Tern, White Crowned Pigeon, Zenaida Dove, White-bellied Dove, the Key West Quail Dove, the Great Lizard Cuckoo, the Smooth-billed Ani and the Cuban Emerald Hummingbird.

When the Spanish discovered Andros, they named it Isla del Esperita Santo, the Island of the Holy Spirit, a tribute to the abundance of water in Andros. And it's easy to see why: 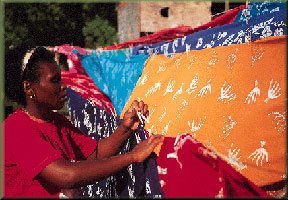 Andros is home of Androsia, the colorful handmade island clothing of the Bahamas. Begun in 1972 as a cottage industry, The Androsia Batik Factory is open weekdays for guest visitors to view the batik/dying and sewing process. Great deals on clothing and fabrics can be found at both the Androsia Factory Outlet Store and the boutiques all around the different islands of the Bahamas.