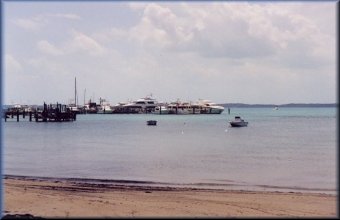 This Island, named for the simple fact that it is crooked, lies 240 miles southeast of Nassau. Colonel Hill, the capital of Crooked Island,has a relatively small population of around 360 permanent residents. The Latitude being 22.77 north,and the longitude being 74.22 west. The total population of Crooked and Acklins Island's is a mere 778 residents. The Island is connected to Acklins Island by ferry, and both are enclosed by a shallow lagoon,known as Bight of Acklins.

Colonel Hill lies on the northeastern end of the island, and is said to be where the first post office in the Bahamas was located. Guarding the North End is Manne Farms Fortress, Looking over the Crooked Island passage, now left abandoned, but once used by the British fortification in the war of 1812.

Crooked Island opens into the Windward Passage, which is the point of separation of the Caribbean Sea and the Bahamas. Together with Long Cay, Crooked Island forms the northwest part of the atoll system. The only village on Long Cay is Albert Town. Classified as a ghost town, and formerly known as Fortune Island, it on served as a transfer point ships containing cargo between Europe and America.

Some of the Crooked Island sites hold more ominous names, such as Gun Point and Cripple Hill.

Once bearing the name Fragrant Island, for the pleasing aroma from the natural herbs found around the Island, it was in Pittstown where it is said that Christopher Columbus first landed on the island. He then christened the island Isabella, after his queen.

Along with Acklins Island, Crooked Island then existed in obscurity until 1783. At that time American Loyalists began to call it home. They brought slaves to their plantations, as well as money to begin a cotton industry that eventually failed due to Emancipation and soil depletion. Their next attempt was diving for sponges, another failed attempt when the sponges became decimated by fungus. At the beginning of the 19th century, 1200 slaves were employed on over 40 plantations.

Today the island is still plentiful of bird life. The island birds thrive of the surrounding reefs and the many cliffs present along the coastline. Cascarilla Bark, a herb on the island is used in the islands exporting of Cascarilla Liqueur.